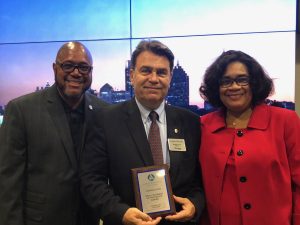 Aerotropolis—The Aerotropolis Atlanta Alliance, in partnership with South Fulton Chamber Of Commerce, is proud to recognize Christian City as its Small Business of the Month for August. Christian City is a unique community operating programs benefitting at-risk youth and others in need near Hartsfield-Jackson Atlanta International Airport.

Nominated by Dyan Matthews, president and CEO of the South Fulton Chamber of Commerce, Christian City supports youth victims of abuse or neglect and provides temporary shelter for children who feel they are in danger living on the streets. The organization also offers foster care and adoption program, an independent living community and assisted living facility.

“We can’t describe the gratitude we feel at having Christian City so close to us, and such a part of us,” Matthews said. “This organization is a blessing and an asset to the entire Aerotropolis.”

Christian City was established as a cottage for abused and abandoned children on Valentine’s Day in 1965. Today, there are more than 1,000 children and senior adults live on the campus, which includes the Children’s Village, homes for active seniors, a thrift store, 200-bed skilled nursing and rehabilitation center, 150-bed assisted living center and two memory care units.

“A child or a young person on the streets in Atlanta is approached by some element of the human trafficking industry within 24-48 hours,” Martin said. “We offer a safe space for those kids to get off the streets and hopefully re-united with families, and to stop being victimized.”

“Christian City is an important and vital resource to Union City of course, but also all of metro Atlanta and the world,” Williams said. “Their mission is vitally important, and we are proud to support them.”

Because of their award, Christian City qualifies as a finalist for the Aerotropolis Atlanta Alliance’s Small Business of the Year Award, to be announced at the State of the Aerotropolis luncheon in December.